The new Vans use the collaboration with Andrew Allen for a new and very original design.

Following the collaboration with Andrew Allen, Vans released an entirely rubber iteration of his Slip-On 98 DX, borrowing cues from the classic Slip-On .Nicknamed “Checkerboard”, the classic checkerboard pattern embellishes the entire upper of the shoe with a black and white print. To add a lighter touch to the classic black and white layout, the new trapezoidal checkerboard pattern is repeated in the middle of the foot and forefoot in red and blue. and yellow on the heel.

At the price of $95 USD, you can buy Anaheim Factory Classic Slip-on 98 DX by Vans on the brand’s website. 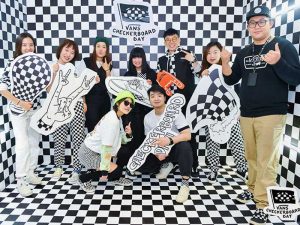 But what is the real story of the brand?
It was 1944, and young Paul Van Doren had just dropped out of eighth grade. Instead of at school, he preferred to spend his days at the track, where he was known by the nickname “Dutch the Clutch” (“Dutch catcher”) for his precocious skills as a bettor and for his ability to earn money.
Despite his resourcefulness, it was not long before his mother put an end to his “equestrian feats” by ordering him to hire him at Randy’s, a shoe factory in Boston, his hometown.
After 20 years, during which he had reached the position of executive vice president of the company and moved to California to save a struggling subsidiary, Van Doren decided to test himself by starting his own footwear company. 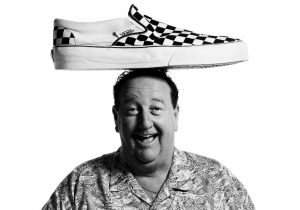 In 1966, Paul, along with his brother Jim and friends Gordy and Serge, opened the Van Doren Rubber Company, at 704 East Broadway in Anaheim, California. Their business model was unique, as the shoes were made locally and sold directly to the public. “Canvas shoes for the whole family” was the slogan on the box.
On the opening morning, the Vans boat shoes, now known as the Authentic, were purchased by 12 customers. During the first week, a customer ordered a pair of a different color and Van Doren asked for a sample of the fabric to use, thus starting the customization of the shoes for which Vans is renowned.

A NEW OFF-WHITE FLAGSHIP IN PARIS

Comme des Garcon and Vans together for a new release.

Thanks to “Squid Game” sales of the white Vans Slip-on