As rumored during these weeks, the latest collaboration of the streetwear brand Supreme aims to create a real mobile box logo. The project is more specifically realized through the partnership with the city of New York. The result? A Supreme-branded subway train. The first images of the train moored in the New York City transport depot surfaced online during the past week. 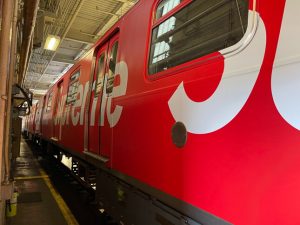 The news was later confirmed by a representative of the Metropolitan Transportation Authority (MTA). This had stated to the WCBS that the Supreme railway wagon was the first case in which a train is wrapped completely by decorative panels. The inside of the carriage is untouched.
The particular livery can be seen traveling on the L line from Manhattan to Brooklyn making the appropriate stops in the home of Supreme. The marketing strategy was implemented in view of the 2021 autumn/winter release. Once again, the brand confirms itself as an incredibly avant-garde reality regarding guerrilla advertising. However, so far there has been no indication as to how long cooperation will remain on track. 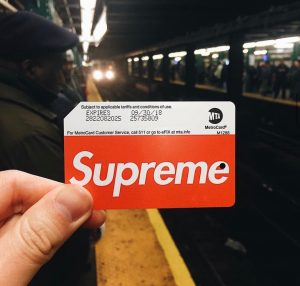 In this regard, we also remember that in 2017, the MTA and Supreme collaborated on the creation of a Metrocard with box logo. Commuters could buy tickets at a number of city stations. It goes without saying that later the tickets were promptly purchased from the resellers, ending up being sold online at prices 10 times higher than the purchase price.