Pretty Woman, released in American theaters on March 23, 1990, it enchanted for the history, for the charm of Richard Gere, but above all, the incredible costumes. Curated by Marilyn Vance, they earned the costume designer a BAFTA nomination in the Best Costume Design section. Her clothes have been copied and re-copied over the years, worn for themed parties, and celebrated in museums worldwide, including Victoria & Albert in 2014. The red dress worn by Julia Roberts in one of the most romantic scenes of the film was exhibited in the London museum.
Prev
Next
Probably inspired in shapes and colors by Valentino’s creations, it was made and signed directly by the costume designer. With a Bardot neckline, bare shoulders, and a well-defined waistline, the Pretty Woman red dress is an explosion of elegance and sensuality. It has been studied in every tiny detail to amaze but without ever being excessive. Yet, the original dress should have been quite different.
“The top management wanted a black dress, but I knew that dress had to be red. So before making the final decision, I created three different dresses. We had Julia try it on in all shades of color. We lit it and reshot it. Poor Julia, she had to do so many trial shots for the color and just one dress! In the end, I managed to find the right shade of color and convinced everyone to follow me along that path. ” This is what Vance told in an interview with ELLE US. And the choice was the right one.
Always at the American magazine, the costume designer told the numerous requests from men who want to recreate the dress for each other’s companions. Even today, hundreds of them arrive at Western Costumes, the factory that she made the dress.
To complete the look, however, at least in the film, there was a very precious necklace with earrings worth a total of 250 thousand dollars. As reported by Refinery29, it is characterized by twenty three pear-cut rubies, positioned in the center of 18-karat gold hearts and divided by set diamonds. And to think that even in this case, the scene had to be very different from how we know it now. The gesture of suddenly closing the box with the necklace was improvised by Gere, in agreement with the director to move the scene. And Julia Roberts’ famous laugh was anything but planned. 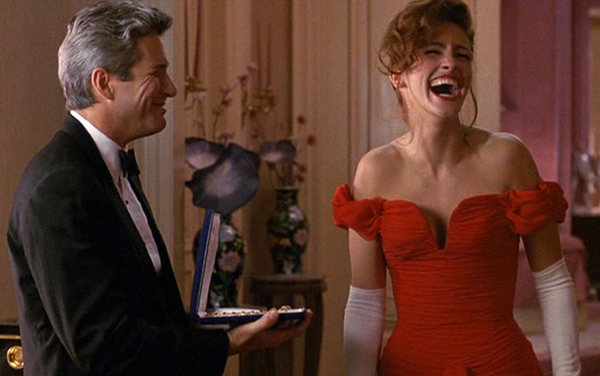 THE NEW RECORD CHRIST IN BRAZIL

THE HIDDEN MESSAGES OF ARIA BY GUCCI