This year the Met Gala has changed its debut date. The most anticipated event in New York generally takes place on the first Monday of May, but the organization has decided to postpone the great parade (Covid cause) to Monday, September 13. As we know it is not an event like many others, but it is the Event par excellence, the most awaited, the most desired, in short, the most important ever. From 1948 to today, the MET Gala has been able to increase its prestige role for the star system. It is the appointment for every true fashion lover and where designers indulge their creations. But not only fashion. The main purpose of the gala is to raise funds for the Costume Institute.

This year the theme (and consequently the dress code) was “In America: A Lexicon of Fashion”. Everyone has therefore tried to interpret in their own way the role of fashion and
American costume.

Let’s start with Billie Eilish who put aside for once her oversized outfits to show off a dream creation all tulle, peach pink, signed Oscar de la Renta. A magnificent and romantic dress in old Hollywood style inspired by the unforgettable icon Marilyn Monroe. Timothée Chalamet opted for a Haider Ackermann total white suit. Except for the black silk jacket collar, paired with cream converse. Model Joan Smalls opted for simplicity with a white dress by Ralph Lauren. While Lili Reinhart, beloved actress of Riverdale, chose a floral pattern wearing a confetto pink composition with embossed floral decorations by Christian Siriano.

Very elegant Kaia Gerber in black. The top model showed off a creation by Oscar de la Renta, with see-through bustier and wide skirt. She revealed that she is inspired by the Halston dress Bianca Jagger wore to the event in 1981. 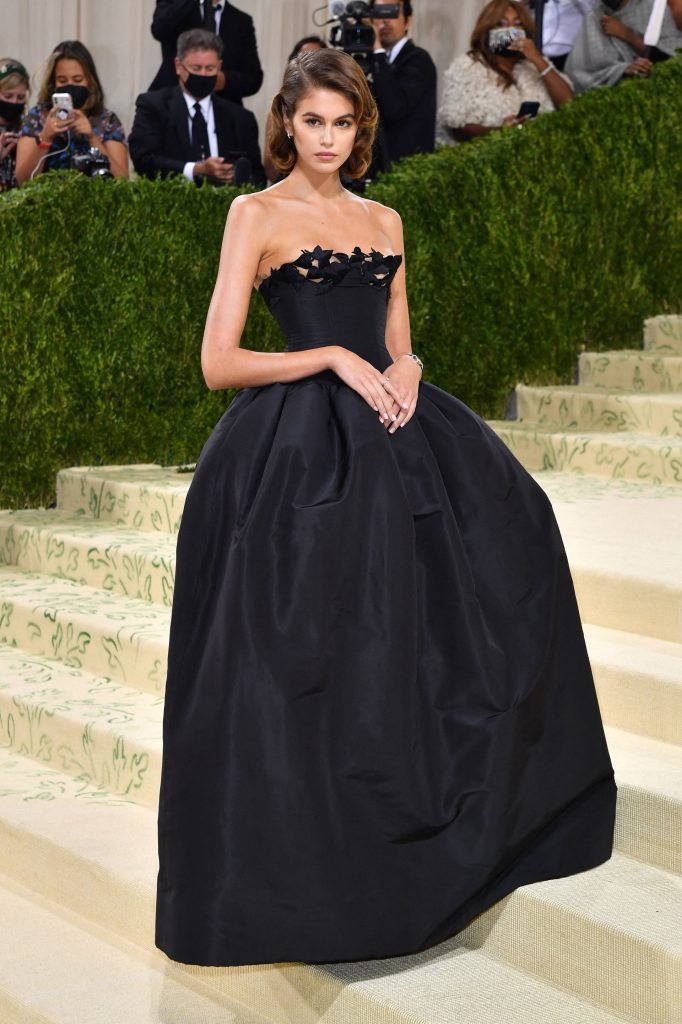 Perhaps slightly out of context, but no less remarkable Kim Kardashian who has decidedly dared with a proposal by Balenciaga, wearing a completely black dress with a masked face, so as not to reveal the identity. Rihanna returns to the Met Gala and for the 2021 edition wears a total black creation of Balenciaga Couture. Elegant and refined Gigi Hadid that offers a little black &amp; white dress by Prada. Kendall Jenner proposes a nude dress with accentuated transparencies of Givenchy, covered by a cascade of crystals. Kate Hudson arrives at the Met Gala and, after Venezia78, opts for a pastel pink suit by Michael Kors with a fringed cape. Elegant Emily Blunt in a dress covered in crystals with tiara on the head of Miu Miu. Frank Ocean in Prada is accompanied on the red carpet with a doll in his arms.

WHAT IF ENGLAND LOSES ITS QUEEN?