The Monégasque racing driver Charles Leclerc is the new Ambassador for the Giorgio Armani Spring/Summer 2020 Campaign. «Fashion, as well as music and motorsport, have always been a passion of mine and represent such an iconic brand is an honour». Leclerc, that after Vettel left, became the main racing driver for Maranello, was chosen as the testimonial for the ‘Made to Measure’ line, the most exclusive and elegant among the Italian brand. We’re talking about the suit tailoring service offered by Armani, that uses luxurious fabrics and personalized cuts. It’s time for new choices, said Armani a few months ago in his open letter for the fashion industry and choosing such an iconic figure among young people, with a distinctive style, will be a success.

Just like the success behind Leclerc career, that trained in the Maranello’s Academy and just in two years, he became the first driver of the racing division. Ferrari already renewed Charles’ contract until 2024 and that just a few days ago finalised the paper to end their contract with Sebastian Vettel, that in the next season will give his role to Carlos Sainz, 25 years old that will become the new backup. 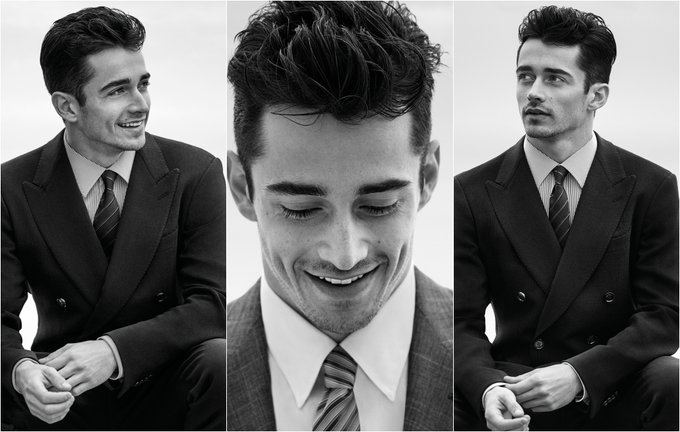 But what is the story behind Charles Leclerc success?

Born in the Principality of Monaco, Leclerc began kart racing in 2005, when he was only 8 years old, thanks to the passion hand down by his father.  «Like every driver, it was hard to combine both racing and school», he says, «I always tried my best: I used to study at home and my grandma would help me and take care of me». In 2011, at fourteen, he entered the All Road Management (ARM), a management company founded in 2003 by Nicolas Todt that support and sponsor young talent that wants to enter the racing industry.

The first turning point for his career happened in March 2016, when Ferrari decided to take him under their wing and enters in the Ferrari Driver Academy. Leclerc quickly starts racing in the GP3 and wins the championship right after his debut. Then, in 2017, after dominating the Formula 2, he gains a place in Formula 1. The following year, he became the second younger driver that ever worked with Ferrari. Even if this put a lot of pressure on his shoulders, he scores 2 wins, 7 poles and 10 podiums, gaining the cheers of the audience.

About his private life, we know that he’s dating Charlotte Siné, that was the protagonist of a funny story that Charles told to his Twitter’s followers. He forgot that she was waiting for him outside of his house because he was too busing live streaming on Twitch his DiRT 4 rally match: «My girlfriend had to buy a subscription to my Twitch to be able to ask me in the channel chat if I could open her the front door. She waited 25 mins downstairs as I couldn’t hear my phone, I had the headphones and was very focused on my rally race».

In February 2020, when we were still at the beginning