Yesterday, the Instagram page Diet Prada published a post alleging that designer Alexander Wang is accused of sexual harassment. And it soon becomes clear that what at first glance seemed like fake news actually contained several principles of truth. The start of this scandalous story begins on 26 December, the date on which the 37-year-old US designer of Taiwanese origins celebrated his birthday. Known for his over-the-top parties and for dressing models like Bella Hadid, Hailey Baldwin, Kaia Gerber and Ashley Graham, Wang has been openly accused of harassment by model Owen Mooney through video. 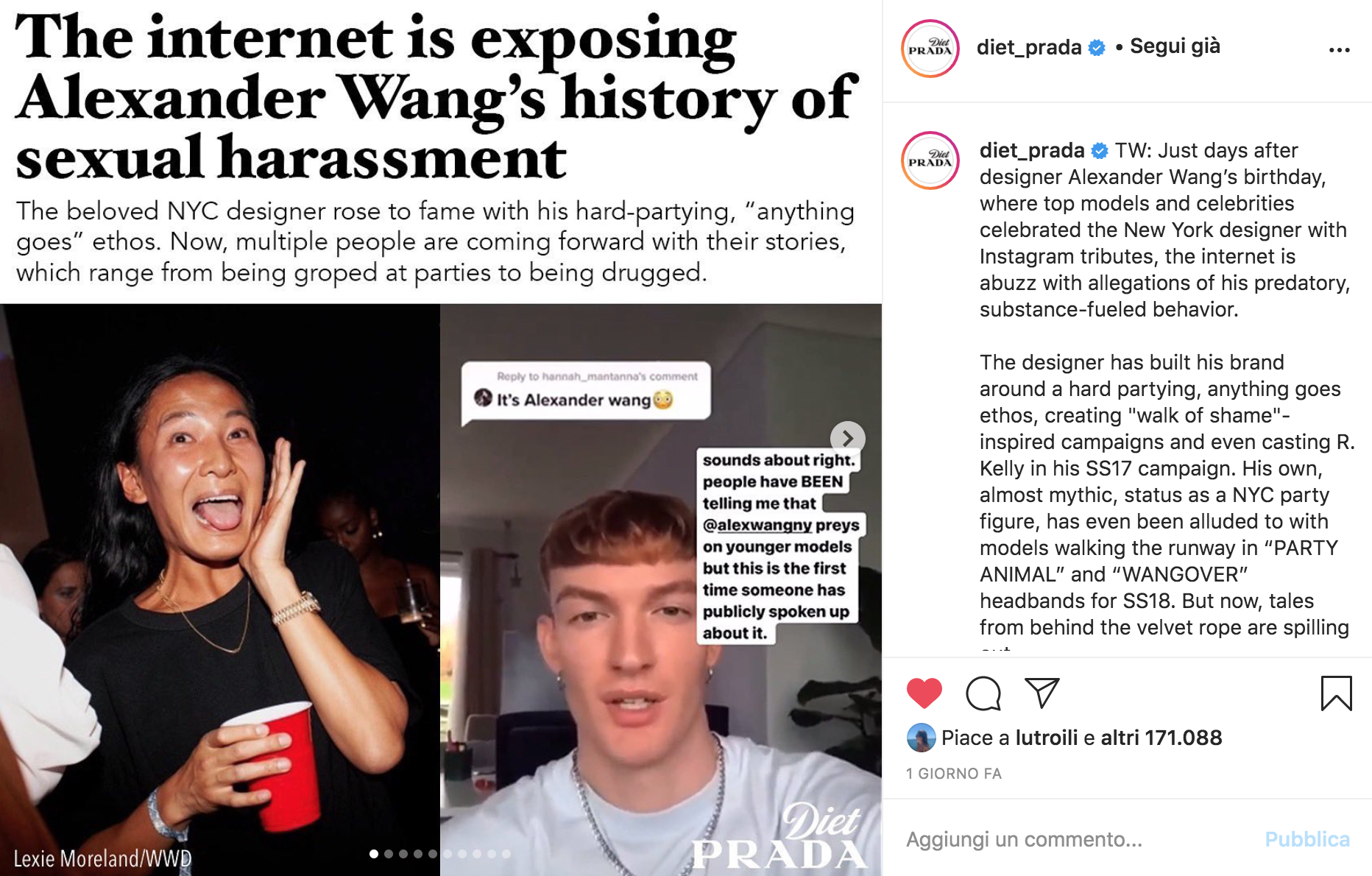 Mooney spoke of an event that took place in 2017 at a New York club, claiming he was “approached” by Wang. Although in the first video Mooney does not explicitly mention the designer’s name, but uses the expression “really famous fashion designer”, in the comments many have guessed that it was Wang. In a subsequent video, it was Mooney himself who confirmed the identity of the attacker. The model went on to say, “Alexander Wang is a great sexual predator, and there are so many other people to whom he did what he did to me. For this, the time has come for him to be denounced “.

And so in the last few hours TikTok first and then Instagram have become safe spaces. Models, professionals, simple students and shop assistants have to tell their encounters, which are anything but pleasant, with Alexander Wang. For everyone, the story goes in one direction only. Many have accused the American designer of sexual harassment.

@shitmodelmgmt (ironic Instagram page dedicated to stories of the joys or pains of being a model) re-posted Mooney’s story, encouraging many other guys to come forward. Unfortunately, a much more serious and defined pattern emerges on the page in Wang’s behavior. Some claimed to have witnessed victims on drugs, often administered without their knowledge, and non-consensual intimate relationships with sometimes unconscious victims.

SMM also stressed an important point. The harassment of male and trans models is rarely dealt with by traditional or sector media. An unresolved issue also within the #MeToo movement. “This is the main reason victims are reluctant to share harassment,” captioned the model.

Alexander Wang has not made any statements so far.

PIERRE CARDIN, THE REVOLUTION IN FASHION

ROME RETURNS THE COLOSSEUM TO ITS ORIGINS

There has been a new development in the story starring