Coronavirus spares no one and this time it hits a big fashion name: Sergio Rossi. The shoe designer and entrepreneur from Romagna passed away on the evening of April 2 at the Bufalini hospital in Cesena, where he had been hospitalized on March 27. To announce his departure his son Gianvito. And to think that a few days before, the Sergio Rossi brand had decided to donate 100 thousand euros and 100% of online sales from 14 to 20 March at the Sacco Hospital in Milan, while his son Gianvito Rossi, owner of the homonymous brand, had made , together with the family, a donation of 100 thousand euros to the Romagna structure. 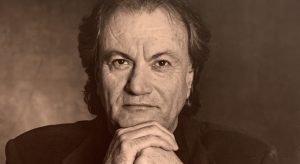 Born in 1935 in San Mauro Pascoli (Forlì-Cesena), he founded the company that bears his name in 1951 in Romagna. A dream come true, after spending his adolescence following in the footsteps of his shoemaker father, selling the his handmade sandals to tourists on the beaches of the Adriatic coast. Shortly thereafter, the brand began to rise. The first boutiques in the 1980s in Ancona and Turin, then the landing in America. Meanwhile, Sergio Rossi collaborates with the big names in fashion to produce their footwear, from Dolce & Gabbana to Gianni Versace. It ends up at the feet of the movie stars, from Anita Ekberg who wears them in the filming of La Dolce Vita to Silvana Mangano, arriving soon over the last few years on the red carpet in Hollywood, from Sharon Stone to Diane Kruger, passing through Anne Hathaway , Nicole Kidman, Sarah Jessica Parker, Halle Barry and Cate Blanchett; without forgetting the music stars, from Taylor Swift to Rihanna, from Beyonce to Ariana Grande.
The numerous advertising campaigns contributed to better delineate the image of the woman according to Sergio Rossi, portrayed by the famous photographer Helmut Newton with angles from below to underline the verticality of the body, insisting on the importance of the heel – always more than seven centimeters high – in so as to give the leg its crucial energy and the female body a sinuous gait.

An Italian taste made of colors, geometries and timeless lines, like those of his most famous shoe, Godiva, the décolleté par excellence, which appears, revisited, even in the poster of the cult film by Pedro Almodóvar from 1991, Stiletto heels.

BEHIND THE SCENES WITH GIGI HADID