The young popstar has surprisingly published her new single “Look At Her Now”, a hymn to the strength to find oneself and react after a love disappointment. The song has been written by Selena Gomez herself together with Justin Tranter, Julia Michaels and Ian Kirkpatrick.

Selena had already undertaken this theme with the single released a few days ago “Lose You To Love Me”. The two pieces together constitute a crisis and rebirth journey for the singer who, regardless of her personal history, is very proud and aware of having faced a topic dear to many women and girls. 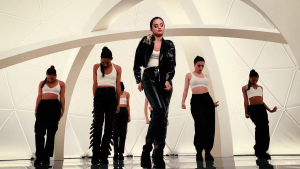 Furthermore both singles, published by Selena at a distance of one day from the other, are made in collaboration with Apple music and shot entirely with the iPhone (#ShotOniPhone is the official hashtag).

It is a real pity that most of the news related to the release of this beautiful song is focused on the hypothetical addressee. It is said that Selena may have written these pieces referring to her relationship with the famous Justin Bieber (recently married to the model Hailey Baldwin) with whom the singer had a well known past and not an exactly idyllic ending.

Whether the allusion to Justin is true or not, it really doesn’t matter. The most explicit dedication of “Look At Her Now” is addressed to those who need to remember not to neglect oneself and get lost because of others’ fault.

The official video of the single (directed by Sophie Muller), beside enhancing the technical performance and appeal of Apple brand and product, proudly celebrates the energy and sensuality of the singer, with a truly bossy and glam choreography.

In short, we didn’t see a Selena Gomez so wild in dancing since the time of “Another Cinderella Story”.

Christmas in Rome with the Gift Room

Good blood never runs between wives and ex-girlfriends. Or, at