One of the undisputed protagonists of 2020 is The Weeknd. The Canadian singer-songwriter continues to grind record numbers and achieve milestones hitherto never achieved by any other artist. A few days ago, he signed a new record with “Blinding Lights,” international hits released in November 2019. In January, Spotify certified that the song has been in the top 10 Global Chart for a whole year. A milestone never achieved so far in the history of the streaming platform.

While these days, the song featured on the fourth studio album, “After Hours”, has reached 52 weeks in the top 10 in the chart of the best-selling singles in the United States. According to Billboard, the track is the first in the 63-year history of the Billboard Hot 100 to spend an entire year in the top 10. The extraordinary performance of “Blinding Lights” is also the result of many commercials published on The Weeknd’s social networks. The voice of “Save Your Tears” was, in fact, the protagonist of the Halftime Show of the Superbowl 2021.

.@theweeknd's "Blinding Lights" becomes the first song in Hot 100 history to spend an entire year in the chart's top 10 (52 weeks).

The song records countless records: “Blinding Lights” beat “Iris” of the Goo Goo Dolls with 19 weeks at the top of the US radio charts. The Canadian singer-songwriter ousts the group after 22 years. It also got the better of Ed Sheeran’s “Shape of You” and Daniel Powter’s “Bad Day” to become the song with the most weeks at the top of the Adult Pop Songs airplay chart. To understand the extent of the success of “Blinding Lights”, dwell on the number of streams reached on Spotify. Over 1 billion and 840 million reproductions thus surpassing “Starboy, another hit single from The Weeknd, which reached” only “one billion and 400 million streams. 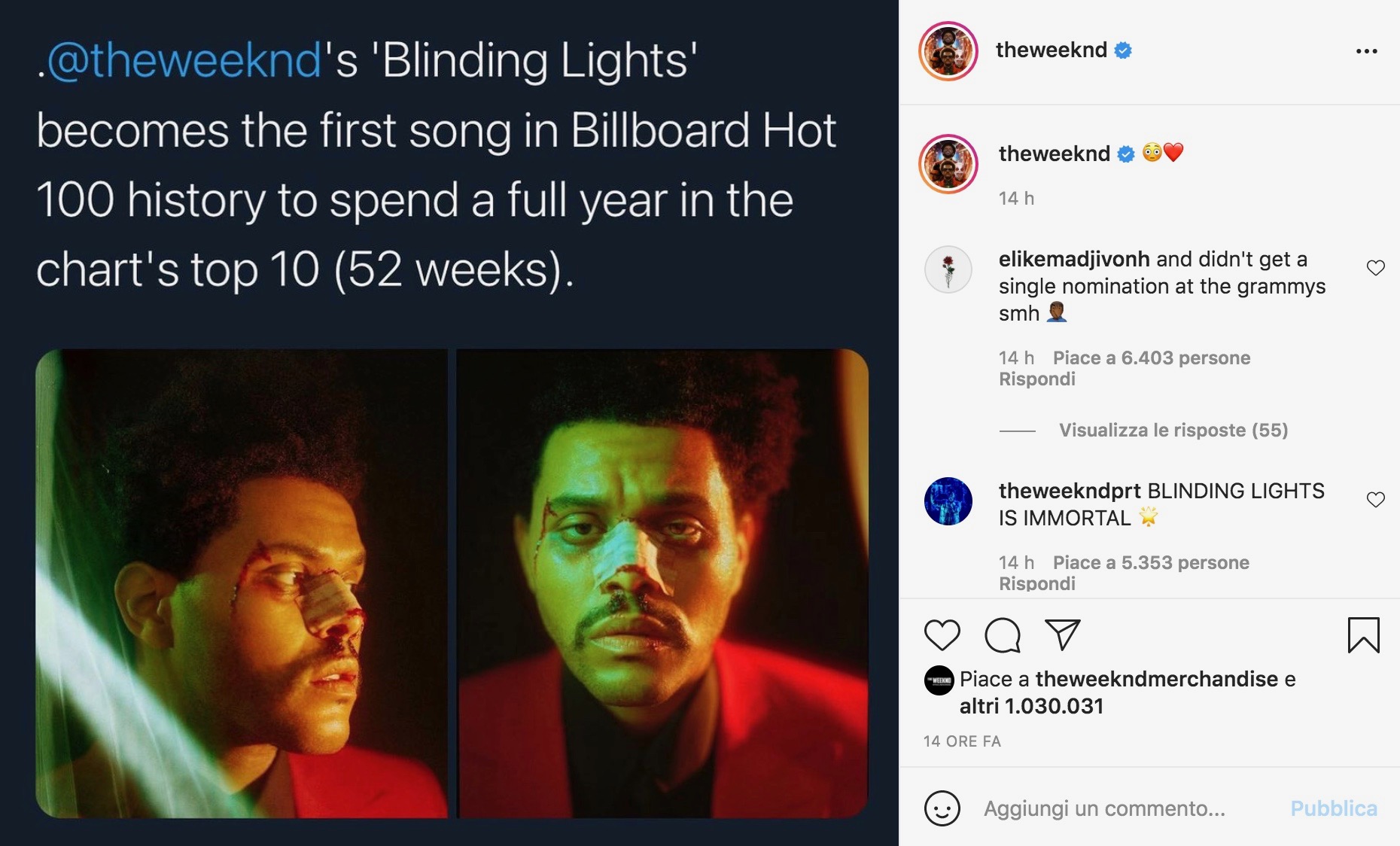 After “Blinding Lights”, we find Post Malone with “Circles” at 39 weeks and “Sunflower” with Swae Lee at 33. “Girls Like You” by Maroon 5 & Cardi B, Ed Sheeran’s “Shape of You”, followed by Travis Scott’s “SICKO MODE”, The Chainsmokers & Halsey’s “Closer”, and LeAnn Rimes’s “How Do I Live”, reached 32 weeks. Bruno Mars with “Uptown Funk!” At 31 weeks and “Bad Guy” by Billie Eilish and “Smooth” by Santana & Rob Thomas at 30 weeks.

The Weeknd in February announced a massive global tour slated for 2022, giving fans the chance to see it live on 104 dates. The After Tour records an extraordinary number of data, resulting from the shows rescheduled from its canceled 2021 tour and 39 new stops.

A BANKSY ARTWORK WAS BURNED

GOODBYE TO DAFT PUNK. IT IS THE END OF AN ERA

Eight minutes to say goodbye to 28 years of Daft