At the end of the hectic week of discounts and promotions that went on till the Cyber ​​Monday, it is good to take a second to focus on what Black Friday represents in 2022 both from the point of view of buyers and the brands.

Black Friday, which year by year has turned into a real black week, is one of the most awaited events of the year by shopaholics as well as by the sellers themselves who periodically record a considerable increase in sales associated with this period. But at the same time it is becoming one of the most discussed and controversial issues from a commercial as well as ecological point of view.

Conceived by Macy’s department store in 1924, Black Friday has now taken on global dimensions that make it a real catastrophe in terms of environmental impact if we consider that purchases, mostly made online, require a logistics machine that is based on the massive use of road transport, not to mention the plastic and paper packaging involved.

In fact, an increasing number of brands and companies are moving away from the typical Black Friday sale and using the day to take a stand, make a difference or connect with customers with a more alternative and ethical type of storytelling.

For example, there are start-ups and environmentally conscious brands that openly take sides against this recurrence by coining new hashtags and opting for radical choices, such as closing the shops on the days of crazy shopping or donating all the proceeds to social projects, as in the case of Everlane which, with its Black Friday Fund, makes a donation associated with each purchase. Also the better known Save The Duck, a brand specializing in 100% animal-free outwear, which will contribute to the realization of a humanitarian project in Afghanistan and also for each jacket purchased between November 26 and 30, the brand will donate a jacket to refugee centers in Italy and the United States.

Among other companies taking part in this “boycott” we can mention Ocean Bottle, Monki, Allbirds, Deciem with its initiative of Slowvember  o Fjällräven, the famous brand of bags and outdoor clothing that uses Black Friday to draw attention to its long lasting articles, calling it “Long-term Investment Friday”. Reinterpreting the meaning of Black Friday is also the mission of some big giants such as Ikea which launches a campaign called #BuybackFriday to encourage its customers to resell their used and unwanted furniture back to the store and Google which has transformed Black Friday into #BlackOwnedFriday by making its platform available to support black entrepreneurs’ activities.

Other brands such as Patagonia e Freitag have released Green Friday initiatives based on exchange, as an anti-consumerist alternative to buying, demonstrating that the solutions to maintain good engagement with customers, by exploiting this particular period in a more conscious way, are unlimited. 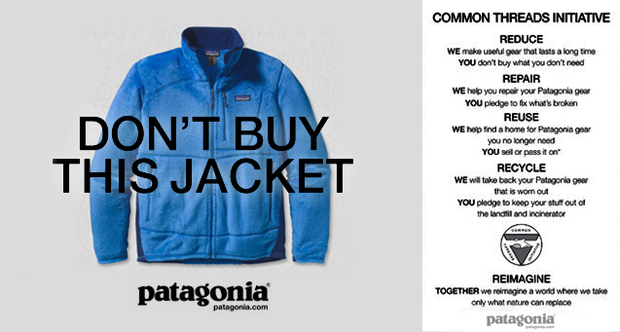 The Sephora Holiday Savings Event with lots of previews on

It is called Efeterträda (which the Ikea website translates as