Zebra and shiny shirts, platinum bangs, mallets, feline-themed tattoos, and a disproportionate amount of synthetic drugs and firearms, is in short the appearance of Joe Exotic, owner of one of the most famous and controversial private zoos of America, and protagonist of the latest Netflix documentary Tiger King: Murder, Mayhem and Madness. Joe Exotic has been a life full of scandals, absurdities and extreme situations. A path that ended in 2018, when the Tiger King was found guilty of two attempted murders, eight charges of illegal sale of endangered animals, and nine charges of abuse of endangered species. All crimes for which the 57-year-old is serving twenty-two years in prison. A story that in these days is also involving President Donald Trump and singer Cardi B, who has even launched a GoFundMe to help him get out of prison. A story on which Hollywood seems to have found the next gold mine capable of fueling the perverse curiosity of the spectators. 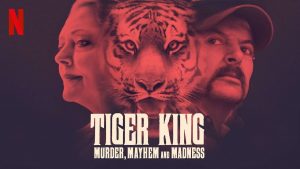 But let’s start from the beginning and understand why the Netflix and Tiger King series are becoming a worldwide phenomenon. Bullied from an early age of 5, Joe grew up surrounded by animals with two brothers and two sisters, in a family where discipline and duty had a greater weight than affection. After high school, he moved to Florida, coming into contact with lion cubs for the first time, but the 1997 was the year he started. Joe’s brother died hit by a truck and with the money that the transportation company paid, Joe decided to buy sixteen acres of land in Oklahoma and give life to his famous private zoo, the Garold Wayne Exotic Animal Memorial Park, becoming owner of over 200 tigers and lions.
Joe began to become famous, receiving visits and sponsorships from stars like Shaquille O’Neal and organizing magic shows in large American shopping malls that included tiger cubs and other animals. Problems also came with fame. Joe had drawn the anger of activist Carol Baskin, owner of one of the main sanctuaries for animals victims of abuse in America, who started a real sabotage campaign against him. To avenge himself, he organized other shows by pretending to work for Baskin and by violating his copyright. The lawsuit led Joe to shell out a million dollars in damages, file for bankruptcy and sell the zoo to Jeff Lowe. In 2015, Joe also tried to run for president of the United States, obviously failing, and in 2018 he ran unsuccessfully as governor of Oklahoma. In the same year, Joe tried to recruit an assassin to kill the enemy Baskin who was ruining his business, but unknowingly contacted an undercover FBI agent who arrested him.
A story told in a documentary that in a week has recorded 34 million visits in the USA in 10 days (among the fans also Kim Kardashian, Jared Leto and Kevin Bacon), so much so that Netflix would have announced an extra episode. Joe Exotic clearly represents the rotten side of a soulless America, which venerates power above all for the classic America’s dream.

THE NEW SOCIAL TREND ? THE #PILLOWCHALLENGE