More and more TV, radio, newspapers, and even Spotify between one song and another, tell us to stay home. It is now a message to which we are so used to hearing it but never as Supreme brand street has thought of doing it. 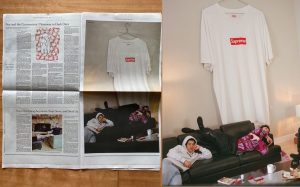 Supreme has purchased an entire page on the Sunday edition of The New York Times, on which it advertises neither an imminent drop nor contains written or messages of any kind, but only two boys are seen in full-Supreme home outfits lying on a sofa while the wall behind them is decorated with a giant white Box Logo Tee.
James Jebbia fans literally went crazy at the sight of this big box logo, so much so that the publicity was thought to advertise the drop of a Supreme charity shirt, but this is not the case because the huge Box Logo has already appeared twice in Supreme’s Instagram account with the message “Stay Home”.

ZADIG & VOLTAIRE AND THE NEW CO-LAB WITH NBA