The long-awaited Paris Haute Couture Week finally opens and it was inaugurated by the sumptuous and at times controversial fashion show by Schiaparelli for the Spring-Summer 2023 season. Just today, at Le Petit Palais, Daniel Roseberry consolidated his status as avant-garde couturier with his latest  Haute Couture collection of the brand, for which the adjective shocking definitely no longer has reason to be limited to the historic shade of pink that made its founder famous.

The designer has indeed brought to the catwalk a series of looks with amazing manufacturing and design, inserting a triad designed specifically for a reinterpretation of Dante’s Inferno but in full Schiaparelli style. Thus the show drags all its audience into a bewitching dark forest where lust, pride and greed merge in High Fashion, creating a provocative and surrealist dialogue. A trait that has always characterized Schiaparelli creations.

Model Shalom Harlow represents the loin, in this case a rare white leopard, with gaping jaws on an animalier strapless sheath dress, Irina Shayk is the lion, in a black velvet dress from which protrudes a reproduction of the majestic head of the animal with a combed mane showing its fangs, while the black she-wolf and her orange eyes turn into a long-haired coat that wraps around Naomi Campbell.

The heads of the animals, while frighteningly realistic, are obviously not real. These are spectacular and extremely elaborate creations of fake taxidermy, built entirely by hand with foam, resin and other artificial materials. An idea that, although it proves to be cruelty free, is still dividing public opinion on social media.

In these dresses, nothing is as it seems. “In addition to evoking the organization of Dante’s literary universe, with three looks for each of the nine circles of hell, I was also directly inspired by some of his most compelling images,” said Roseberry. The journey into the dark forest for the American designer is the perfect metaphor for the torment the artist feels in front of the drawing pad, that fear of the absence of inspiration which becomes the fundamental driving force of the creative process.

“Hell, Purgatory, Heaven: one cannot exist without the other,” writes Roseberry. “We are reminded that there is no heaven without hell, no joy without pain, no ecstasy of creation without the torture of doubt. My prayer for my self is that I remember always that, on my most difficult days, when inspiration just won’t come, no ascension to heaven is possible without a first trip into fire, together with the fear that comes with it. Let me embrace it always.”

Some of the prestigious guests present in front row contribute to giving life to this imagery, including Kylie Jenner who makes her entrée by dubbing the dress worn by Irina Shayk with the lion’s head framed on the bust like a trophy. Among the other stars sitting in the front row also Diane Kruger,  Rossy De Palma and Chiara Ferragni, fresh from the announcement that she will dress Schiaparelli at the Sanremo Festival. 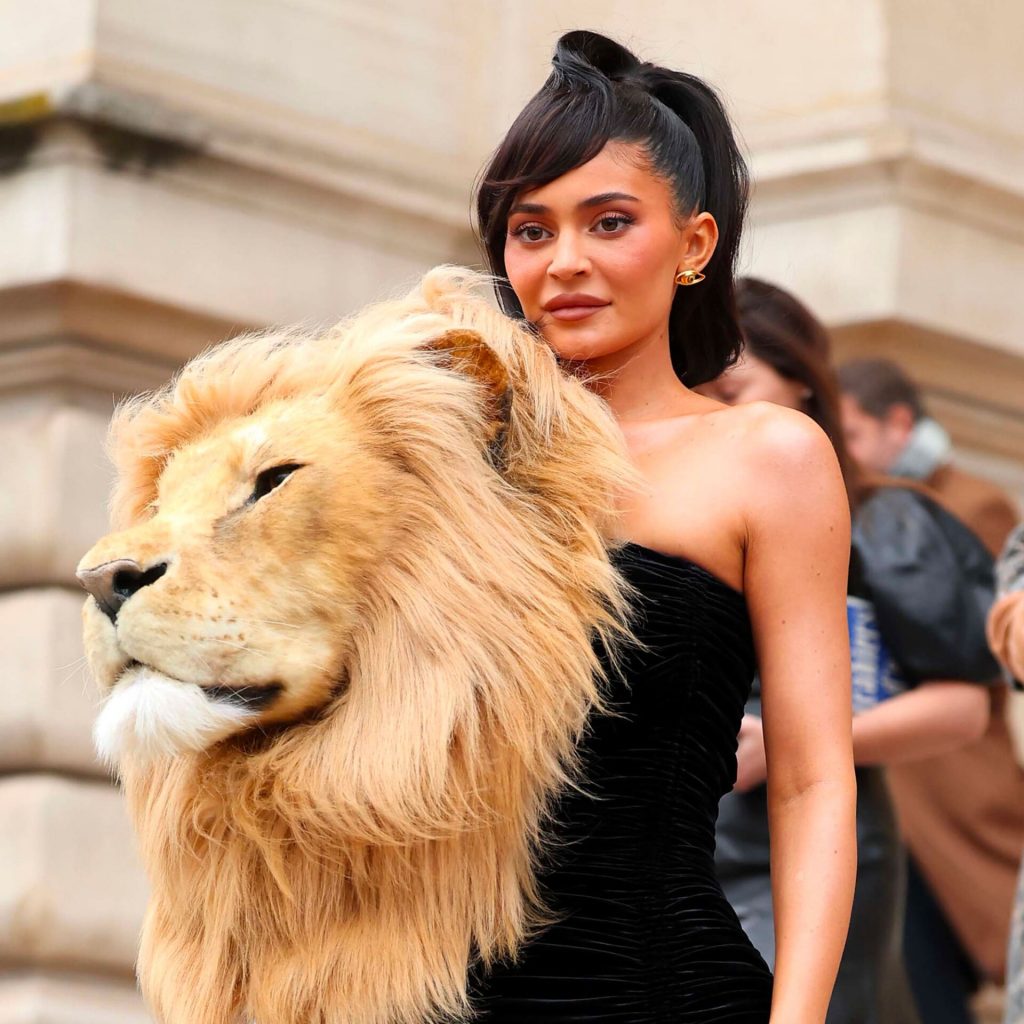 Then in charge for stealing the scene the singer Doja Cat takes arrives, unrecognizable and magnificent queen of this Dantesque inferno, under a shower of red Swarovski crystals meticulously applied by hand on every inch of her face and body. She also joins the narration of the runway, wrapped in a total red Schiaparelli creation like a tremendous but fascinating living sculpture.