The new era of Korean superstars is due to the psychological thriller Squid Games. Jung Ho-Yeon, who plays Kang Sae-byeok, has not only become the most followed Korean actress on Instagram with a total of 14.9 million followers at the time of writing, but now she is Louis Vuitton’s Global House Ambassador for fashion, watches, and jewelry. 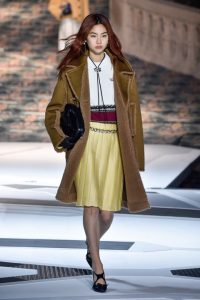 Jung’s career began in the fashion industry, just as a model for Louis Vuitton in the Ready-to-Wear Campaign in 2017. After a second-place appearance on Korea’s Next Top Model, Jung starred in photo shoots for Vogue Girl Korea,
Nylon Korea and ELLE Wedding were a cover stars for Vogue Japan, Vogue Korea, W Korea, and Harper’s Bazaar Korea. The result? Vogue named her supermodel of Korea.
Nicolas Ghesquière said: “I immediately fell in love with HoYeon’s great talent and a fantastic personality and can’t wait to start this new chapter of the journey we started at Louis Vuitton a few years ago.”
In the campaign image,
Jung wears a pair of Louis Vuitton slingback pumps and a double-breasted coat and the new Twist bag in black with a silver chain.
Meanwhile, the second season of Squid games seems to be on the way.
Share this
Tags:

Louis Vuitton has dedicated its latest and most original collection