Apple announced that it will soon bring the possibility to insert the vaccine certificates COVID-19 in the Apple Wallet thanks to the update iOS 15
The technology company has implemented a number of new features with its iOS 15 update, including updates to the Wallet app that will soon allow it to support driving licenses and digital keys. iOS 15 will also allow users to download and store verifiable medical records, including COVID-19 vaccinations and test results, in the Health app and users can choose to share this information with third parties who may require proof of vaccination, including airlines, hotels, restaurants and other business activities. 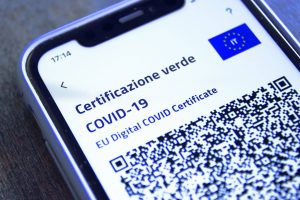 Apple announced for the first time its improvements to its Health app during its annual world developer conference ( WWDC ) in June. The new iOS 15 tools can be used to identify, measure and understand changes in a person’s health, including resting heart rate, sleep and cardio activity, and can now be more easily shared with trusted contacts
To reassure people about the danger that their privacy might run, Apple has promised that the data will remain inaccessible to the outside, and that no one will be able to get their hands on the recordings received and shared, let alone on the messages that will remain encrypted. The same vaccination certificate saved on the Wallet will not be used for other purposes: in other words, no one will be able to see when and where it was used.
And if you want to discover all the features of the new iPhone click here

In February 2020, when we were still at the beginning