Available from today on the American market and from 30 September for Italy the new Air Jordan 1 High OG Prototype, will definitely be a success.The first novelty that immediately catches the eye is the possibility, thanks to the perforated neck, to adapt to be worn high or folded. As you can see the Swoosh logos are still on the sides and the mix of colors white, orange, blue, gray, beige and silver reflective, makes it wearable on any style of clothing, even the most formal. 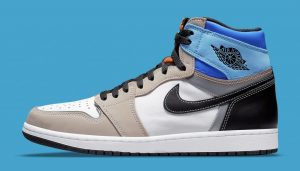 Michael Jordan’s iconic basketball shoes from 1985 continued to be a flagship model in sneakergame. Not only were they released in co-branded colors, but also in retro design, real cult objects for Jordan fans. Made famous as the AJ1 Low and AJ1 Mid have also played a huge role in the increasing popularity of the silhouette in recent years, just like the Air Jordan 1 High OG Prototype.And as we revealed in our article the silhouette of Air Jordan can not be copied

Causes, trials and courts, are all things Nike will likely