The skirt has always represented an ideal of femininity. No, that’s not true at all. Let’s stay away from the usual dogmas because that’s what it is about. If we analyze the history of the costume, we will discover that trousers did not even exist in ancient times. They were only invented to facilitate horseback riding. Both men and women wore roughly the same clothes without them defining the aesthetic standards of their sex. For example, in Ancient Greece, the skirt symbolized virility and youth, as did the kilt in Scotland. Still, in some cultures of Africa, of Asia and Oceania continues to live in traditions without falling into the concept that the West attributes to them.

In the nineteenth century in Europe, a concept of masculinity was strengthened based on some moralistic criteria imposed by Christianity. The man’s attitude had to be that of superiority, strength, and masculinity. The skirt was strictly banned as a male garment. This was until the arrival of countercultures in the 1960s, which began to question the rules dictated by society. And here we come back to talk about the skirt also in the male wardrobe. For hippies, it embodied a utopian future in which social roles were rethought. In punk, grunge, and glam rock culture, it was a pure transgression.

In all this, the world of fashion also plays a fundamental role. In the name of eccentricity, creativity, and freedom of expression, for a long time, he has tried an aesthetic re-evaluation aimed at increasing the gender-fluid trend, thus crumbling toxic masculinity. We have avant-garde brands such as Vivienne Westwood, Raf Simons, Walter Van Beirendonck, Alexander McQueen, and Rick Owens. In 2003 the Metropolitan Museum of Art wanted to analyze this phenomenon with the exhibition “Bravehearts: Men In Skirt” sponsored by Jean Paul Gaultier.

In the last twenty years, some stars have been able to appreciate the skirt as a distinctive piece of clothing in their outfits. And we’re not just talking about genderless icons like Ezra Miller, Harry Styles, Boy George, Billy Porter, and Marc Jacobs. Characters widely considered “manly” such as Vin Diesel, Odell Beckham Jr., Diddy, and Kanye West, have proven to be ahead of the times and independent from the surrounding reality. In 2012, on the occasion of the “Watch The Throne” tour, Kanye West performed on stage with a Givenchy total look designed especially for him by Riccardo Tisci. They were black leather kilts to be worn over skinny pants of the same color.

However, his is not the only case. In 1993 Kurt Cobain and Nirvana sported women’s clothes, including a skirt in a shoot for Mademoiselle Magazine. Emphasizing the extreme comfort of the head and declared themselves significantly in favor of breaking the stereotype. More recently, A $ AP Rocky, Jaden Smith and Young Thug have conquered social media by experimenting with the skirt’s use in their outfits in a mix of high fashion and streetwear. In Italy, where cases are still sporadic, Mahmood, in his performance in Sanremo 2021, showed off a beautiful pleated shirt dress over full black Tabi boots. 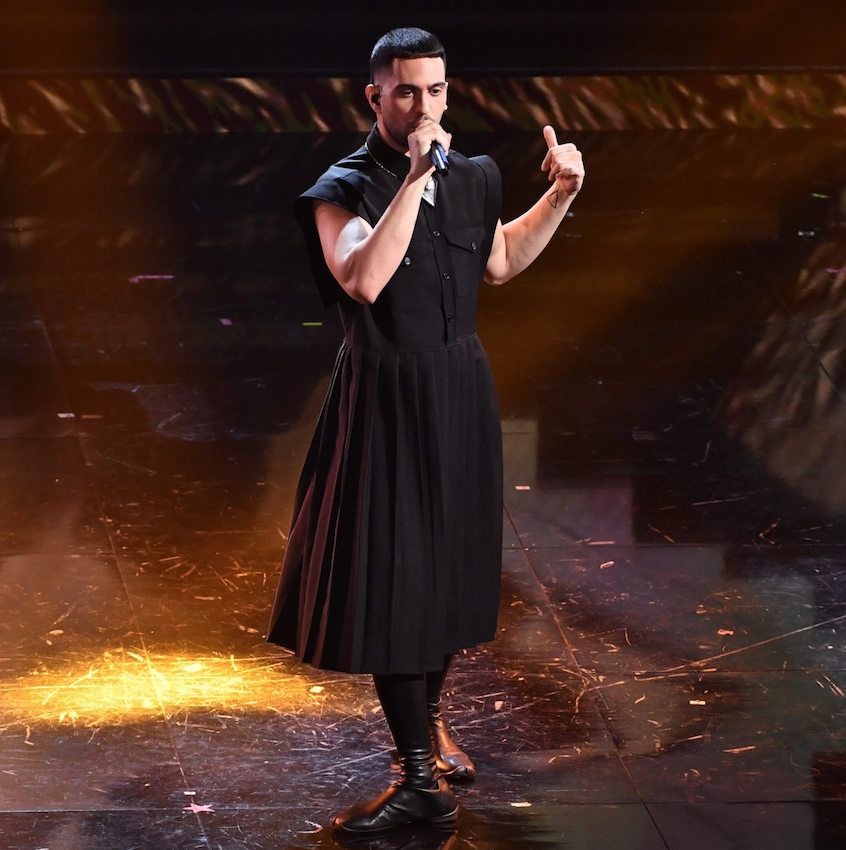 Thus we come to the last few years and affirm genderless fashion among the most prestigious catwalks. Numerous brands have based their collections on inclusiveness and gender fluidity. From Eckhaus Latta to Dries Van Noten, up to Opening Ceremony and COMME des GARÇONS, passing through JW Anderson, Yohji Yamamoto, and Gucci. But the cases in which the concept has been best interpreted by inserting the skirt in a completely surprising way in menswear are those of Thom Browne; Burberry, on the occasion of FAll2021, described the link between man and nature based on the spirit of adventure that pushes people to connect, opening new horizons under the banner of expression; Even the emblem of Armani’s undisputed elegance has included the skirt among its men’s fashion shows.

Based on the facts, can we venture to say that in a relatively short future, the skirt will be socially accepted in men’s fashion as were the jeans worn by women in the 1930s? Posterity will judge.

NIKE IS WORKING ON ANTI-BOT TECHNOLOGY