If it never occurred to you to visit the official Barbie instagram profile, we suggest you to take a look. You will notice that even the most famous historical doll industry in the world has chosen to stay in step with the times, starting to think in a more concrete and stimulating way about the roles and female physiognomies to be proposed.

Barbie’s “Inspiring Women” series was launched last year, to be precise, on March 6, on the occasion of the international women’s day, with the aim of paying homage to the female figures who have marked history with their merits, their acts of valor and intellect and, consequently, to positively influence small consumers.

The series of Mattel dolls has been inaugurated with the Barbies tribute to the artist Frida Kahlo, to Amelia Earhart, the first female aviator to fly alone in the Atlantic Ocean and to the American mathematics and physics Katherine Johnson.

Frida Kahlo continues to be a symbol of strength and originality. We are humbled to honor Frida in our new Inspiring Women series. Designed to inspire more girls around the globe to imagine everything they can become. #MoreRoleModels Learn more via the link in our bio.

This year they are joined by the Barbie astronaut Sally Ride and the Barbie civil rights activist Rosa Parks.

The achievements of these two female figures, like those of their “colleagues”, are unforgettable examples of courage and emancipation. First female (and the youngest) American to have traveled in space at only 32, in 1983, Sally Ride embarked on the Space Shuttle Challenger for a six-day space mission with the task of working with the robotic arm to help position of satellites. She traveled into space a second time a year later, making history again as the first American woman to travel twice in the Space.

The name of Rosa Parks has gained a place in our history books, thanks to her small but very powerful act: in 1955 in Montgomery, Alabama, the Afro-american woman was arrested after refusing to give up her seat on the bus at a white passenger. In the following days, this deed gave rise to a bus boycott that lasted more than a year, representing a key moment in the civil rights movement and in the fight against racial segregation. 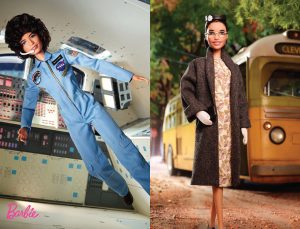 All the Barbies of the series “Inspiring Women” are sold together with “information material that explains the contribution of these women to society, so that girls can be inspired by their stories, while playing”.

“You can be anything” and “Girls need more role models” are just some of the slogans with which the american company is riding the wave of pink power to inspire all the little girls.

HAIR TRENDS FOR THE SUMMER 2019: BRAIDING

SICILIANITY AT THE TABLE WITH I MORI

At 50, Claudia Schiffer is still an emblem of the fashion industry

The integration also passes through fashion and, if anyone had