A truly precious gift for our four-legged friends from Hermès. This is a 1000+ dollar dog bowl. Inspired by the signature motif of the fashion house, the Chaîne d’Ancre (literally anchor chain) is made of oak wood and has two internal stainless steel bowls. Like most Hermès products, the bowl is made in France. 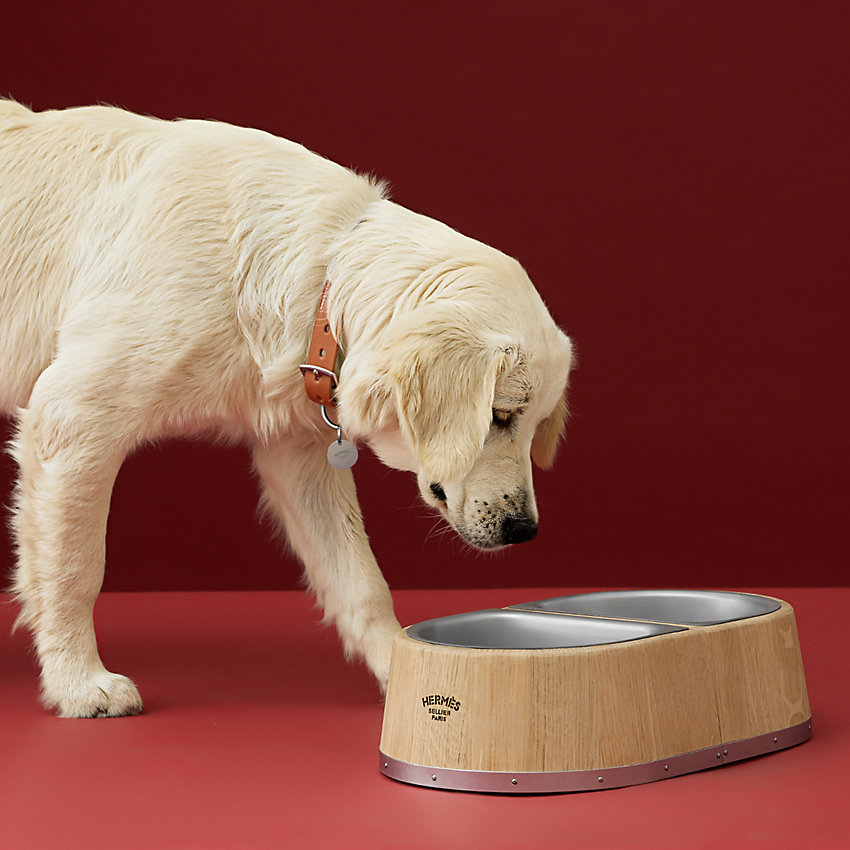 The two bowls available can be separated thanks to a pair of central magnets or be removed from the wooden base—the generous dimensions, allowing a considerable capacity of food and liquids. According to the house, the Chaîne d’Ancre embodies the spirit of Hermès through a combination of his marine and equestrian inspirations. The motif, which has the shape of an elongated eight, was first noticed by Robert Duman, Emilie Hermès’ son-in-law, while on vacation by the sea.
Prev
Next
The most striking aspect of the bowl, however, is the assembly process similar to barrel-making techniques. Typically handmade, they are made with woods chosen according to the type of liquid they will have to keep. After the slats have been selected, the wood is heated over a fire up to 150 ° C, then folded into a barrel shape. Subsequently, the barrels are put back on the fire for roasting, which crystallizes the natural sugars in the wood. Finally, they are sanded twice before being used. For the bowl, Hermès has chosen oak wood, often used for the production of wine. Think that the wooden slabs have aged at least 90 years. The price of this accessory? Buyers can grab the incredible product for $ 1,125.
The French fashion house sells numerous pet items, from collars to leashes and carry bags. But his new dog bowl is truly something special.
Share this
Tags:

A RAINBOW BY BIRKIN HERMÈS FOR CARDI B

There are many collectors in fashion. Some people are obsessed