Great news for the fans of Money Heist. After the announcement, that the beloved Spanish Tv-series will be renewed for a fifth and sixth season, what shocked were the revelations of the Professor himself, Álvaro Morte. During an interview released for the Chelsea Film Festival, the actor said: “I’m aware this comment will make me very unpopular. The Professor was a very weird guy, a very lonely guy and what happened with the band and finding love, it’s a really small chapter in his life. If we’re talking about the end of the character, I think at one point, I’d like to see him go back to that loneliness, that solitary life that he’s more used to and seems more comfortable in.”

But who is the Professor? No criminal record, no documents, he renewed his ID for the last time when he was 19 years old. A ghost, but a smart ghost – says Tokyo. A man without a past, without a story, without a passion or any kind of clues that can trace back his identity, but also his weaknesses. A sharp mind paired with a clumsy attitude, and this is why he’s the mind behind the team, without moving a finger. Completely in contrast with his brother Berlin; unforgettable the scene where the two of them sing “Bella Ciao”, a song that represents the Partigian Resistance. The Professor sings with a low voice, almost shy, while Berlin sings with arrogance. 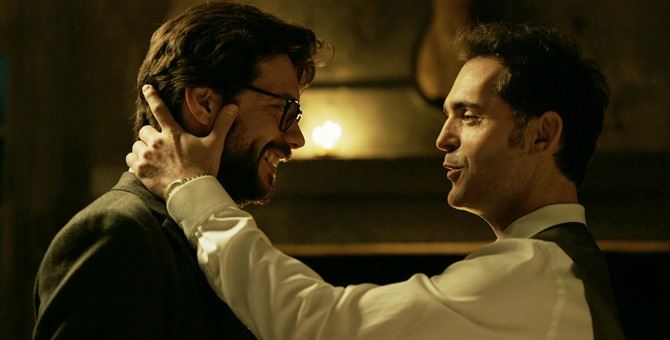 And then, there’s his passion for Origami, that seems to celebrate the beauty of paper, in opposition to money. Origami’s paper is sacred, and the Professor is frequently shown while folding a crane that represents purity, in contrast with money paper: dirty and infected by the use that the banks and industry made of it. “Why you don’t want to listen to me, Raquel? It’s because I’m one of the bad guys? […] But if no one else does what we’re doing, it’s okay for you. In 2011 the European Bank created out of nothing 171.000 million euros, from nothing, just like we’re doing. […] Do you know where that money ends up? In the Bank’s pockets, directly to the upper class.”

Money Heist is one of the most popular Netflix productions, which has a huge following all over the world. It also influenced fashion, as we revealed in this article.

THE FUTURE AFTER THE XBOX SERIE X