There are many collectors in fashion. Some people are obsessed with Jean Paul Gaultier, others with Chanel, others with Valentino. However, Hermès Birkins are the “Holy Grail” of collectors. So beautiful that you can’t own just one, or at least this could be why Cardi B has so many. The rapper showed the people of the web all the bags of the Maison in possession of her, particularly aiming at a single, as iconic, model.
The history of the Birkin Bag has been around the world, and, to date, it is impossible not to know it. Whenever a Hermès bag ends up at auction, its value reaches mind-boggling figures, underlining its importance. Cardi B had no qualms about showing her entire Birkin collection to the Instagram audience, about 26! A number that we are sure is still a work in progress. 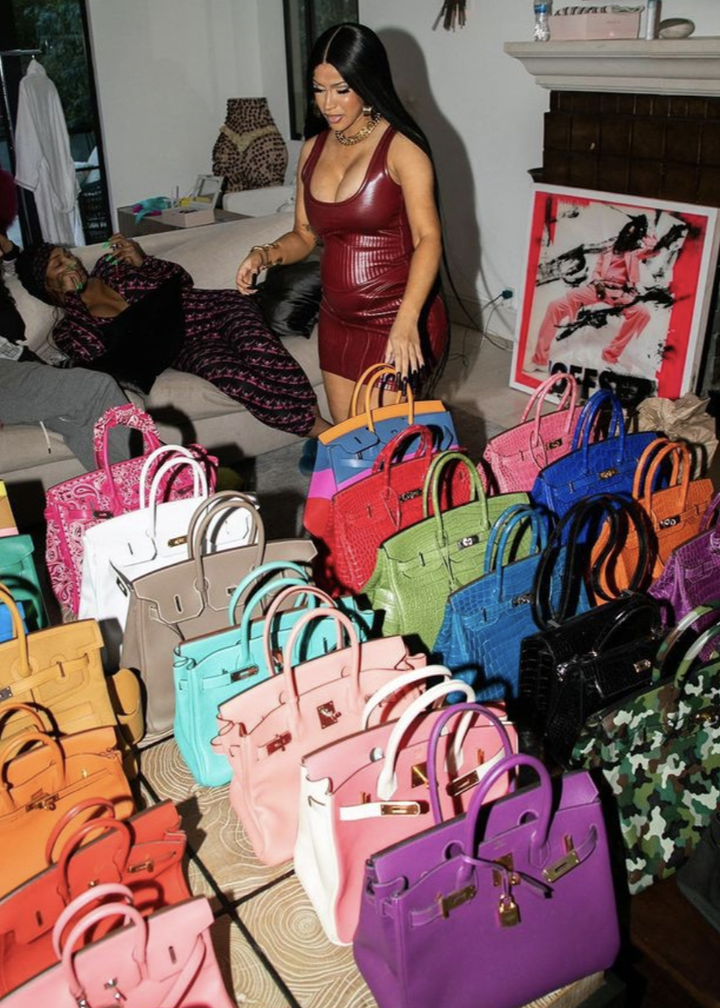 The rapper, currently pregnant, has posted several photographs showing her booty in different colors, a whole rainbow of fashion packed into one wardrobe. From mandarin orange to candy pink to reach cherry red and electric blue. Cardi B’s bags have certainly captured the attention and given way to further controversy. Many followers, in the comments, reprimanded her for the expense deemed “excessive”. Words to which Cardi B promptly responded in kind.
This isn’t the first time she’s sporting her Hermès booty on social media for the rapper. On the contrary, the truth is that she often entertains Instagram followers by sharing the beauty of her favorite bags with them. And usually, those bags are just Birkins. Already last year, she had shown her collection of Hermès bags to her followers, and the most attentive immediately noticed that the number has soared. But not just Birkin. Cardi B also has a soft spot for Kelly bags, demonstrating her happy relationship with Hermès and his products.
Prev
Next
P.S. In the photo, there are 26 bags, but something tells us that Cardi B has many more rare pieces hidden in his apartment.
Share this
Tags:

VTMNTS IS THE SECRET PROJECT UNVEILED BY VETEMENTS

STOP TO MARLBORO CIGARETTES IN THE UK