Despite its name, Vetements never really went into clothing. The brand is more focused on using its fashion shows, lookbooks, and clothing drops to playfully twist the status quo rather than meet an audience’s needs. And, of course, the Fall 2021 collection is no different. It starts with an apocalyptic atmosphere where a red infernal storm is an outline. It then continues with a more reassuring background complete with a waterfall and rainbow, then the elevation with an ethereal aura. 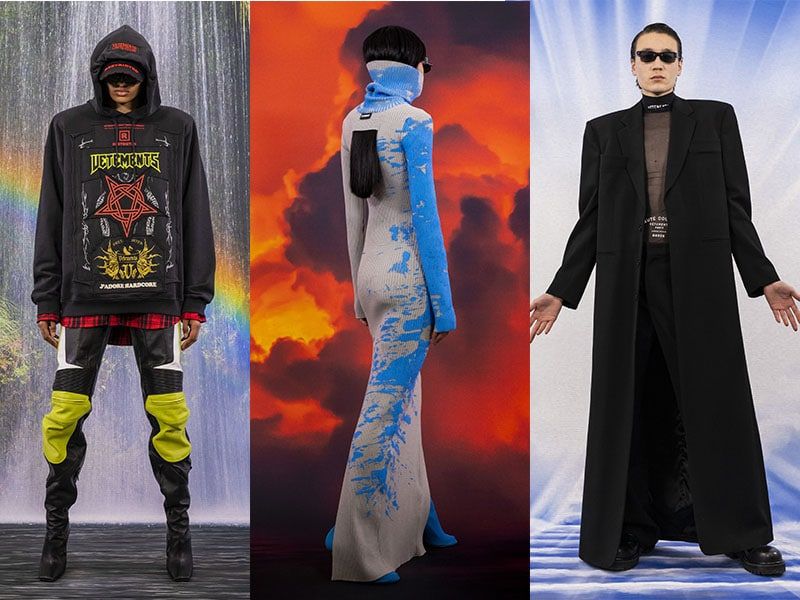 This is the imagery in which Vetements wants us to immerse ourselves and celebrate the first show recognized within Paris Fashion Week’s official calendar. Yes, because although the rebel brand has always paraded in conjunction with the French event, the latter has never included it in the list of prestigious brands that are part of it. Such an event had to be appropriately celebrated, and so it was. This is the most full-bodied line ever, with a total of one hundred and sixty-five different looks.

Although its real goal is to create the maximum possible impact, Vetements garments maintain the same mood. Exuberance is once again the host, and an accentuated grotesque aspect is not spared. Black balaclavas, metal-style graphics, can of Red Bull or Coca-Cola in the styling, anarchist symbols, and unconventional poses are the season’s stylistic code. But not only. A decidedly important part is also played by the sunglasses inspired by the “Matrix”, the oversized volumes, the cropped cuts, and the irreverent prints. So we have phrases like “HAUTE COUTURE” on caps and t-shirts, “FASHION IS MY PROFESSION”, “I LIKE LONG WALKS AND SEX BEFORE MARRIAGE,” and a quote from the Bernie Sanders campaign also taken up by Balenciaga.

The co-ed lookbook is titled “FUCK THE PAST “, but a shift from the past by Guram Gvasalia is hardly noticeable. So the message isn’t entirely clear, but we’re talking about Vetements and that’s fine.

THE BILLIONAIRE BUSINESS OF FAKE NIKE

THE MOST EXPENSIVE ARTWORK IN THE WORLD