The famous white bikini worn by Ursula Andress in the 1962’s Agent 007 – License to Kill, will be put up for auction on November 12 by “Profiles in History” in Los Angeles. Is estimated that the two-piece can be sold for $ 500,000 as revealed by the auction house itself. Andress, who at the time was a relatively unknown actress, has repeatedly attributed her success to that bikini, calling it her “springboard” and in 1964 she even won a Golden Globe for Best Debut Actress for the role of Bond girl Honey Ryder. The appearance of the provocative blonde beauty emerging from the water with the ivory two-piece, alongside Sean Connery remains a cult scene in the history of cinema.

The bikini was designed by Ursula Andress herself, who worked closely alongside the director Terence Young and costume designer Tessa Welborn so that the bikini could perfectly fit her body. First unveiled in 1946 in Paris, the bikini was considered, since its first appearance on the big screen, to be too bold for a decent woman’s wardrobe. Only in the 1960s, with the feminist and sexual revolution at the door, was finally recontextualized. In the same year of the release of the film, Playboy dedicated its first cover to the two-piece. The bikini has already been auctioned in the past, by Ursula herself in London (2001). At the time the lucky buyer was Robert Earl, the co-founder of Planet Hollywood, for “only” 38,260 euros. 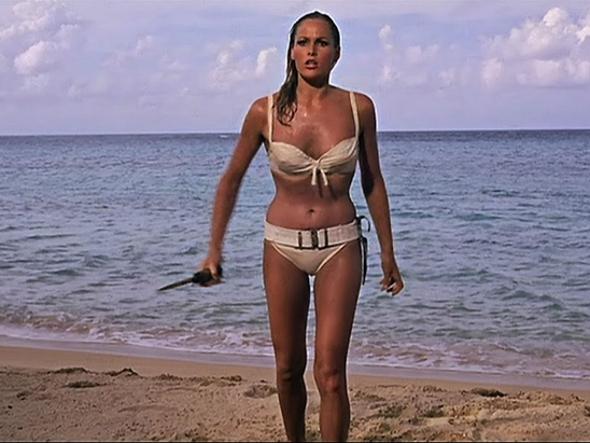 STÜSSY CELEBRATES ITS 40TH ANNIVERSARY WITH A CAPSULE COLLECTION

DIOR PAYS HOMAGE TO PUGLIA FOR THE DIOR CRUISE 2021 CAMPAIGN

THE NEW “JAMES BOND” IS A WOMAN

The next James Bond will be played by a woman,