Ibrahimovic is one of the many celebrities that joined the Fortnite hype, that is now one of his favourite games. Recently he shared on his Instagram account his 1st Win in a Battle Royale and tagged his teammates, Theo Hernandez and Castillejo. 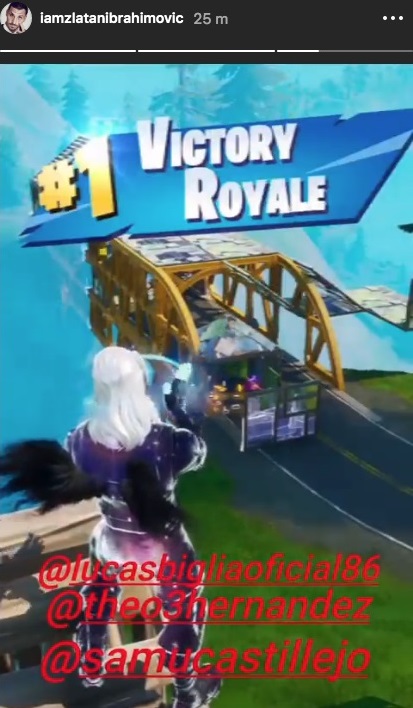 But who are the best players in the Epic Games’ Battle Royale?

Myth is one of the most important Fortnite players of all time, still unbeatable his mechanic’s technique which is at the heart of the game. He was the first one that pushed the construction of buildings, documenting everything on his YouTube channel. There is a reason why he’s nicknamed The Architect. Myth joined Fortnite in 2017 when the game wasn’t as popular as now and decided to focus just on that.

Turner Tenney alias Tfue, class 1988, usually is at the centre of the attention for his problematic statements and controversies. But thanks to the abilities and personality of this pro player that Fortnite Battle Royale became one of the most famous games in the world. At the moment his Twitch channel counts 8 million followers.

Tyler “Ninja” Blevins in the last three years became the face of the Battle Royale, bringing the games streaming to new levels of popularity. He has so many followers on all kind of social media platforms that we lost count and even got a Skin on Fortnite that have his name.

Mongraal started his career playing Fortnite tournaments on his Friday nights and quickly became one of the best players in the world. He’s constantly improving and always on the hunt for other players that can join his team. Many consider Mongraal one of the fastest players of Fortnite and not many people can beat him in a battle.

And what about the Italians? Giorgio Pow3r Calandrelli is the most famous Italian gamer, an Icon of the “Fortnite Generation”.

Now we’re waiting for Doomsday, the event that will close the second season of Fortnite.