Only five days to Easter. And if like us, have you ever wondered what is the Easter egg the most expensive in the world and how much it costs, you’re in the right place. Here you can find the list of 10 Easter eggs most costly in the world with their price. In the list, you will find eggs and rabbits, chocolate, and real treats/the works of art created by the expert hands of artists and chocolatiers the most talented in the world.
1. The egg is the most expensive in the world is not made of chocolate, but it is a jewel coveted by collectors around the world. We are talking about the eggs of Peter Carl’s masterpiece made by Fabergè, built from 1885 to 1916 for the tsar. The entire collection is composed of 52 Easter eggs jewel. There were only 45. To produce one egg were required months of work. These works of art are composed of precious stones, enamel, gold, silver, diamonds. The prices of these eggs are different, but all evaluated as luxurious in the auctions where they were presented. 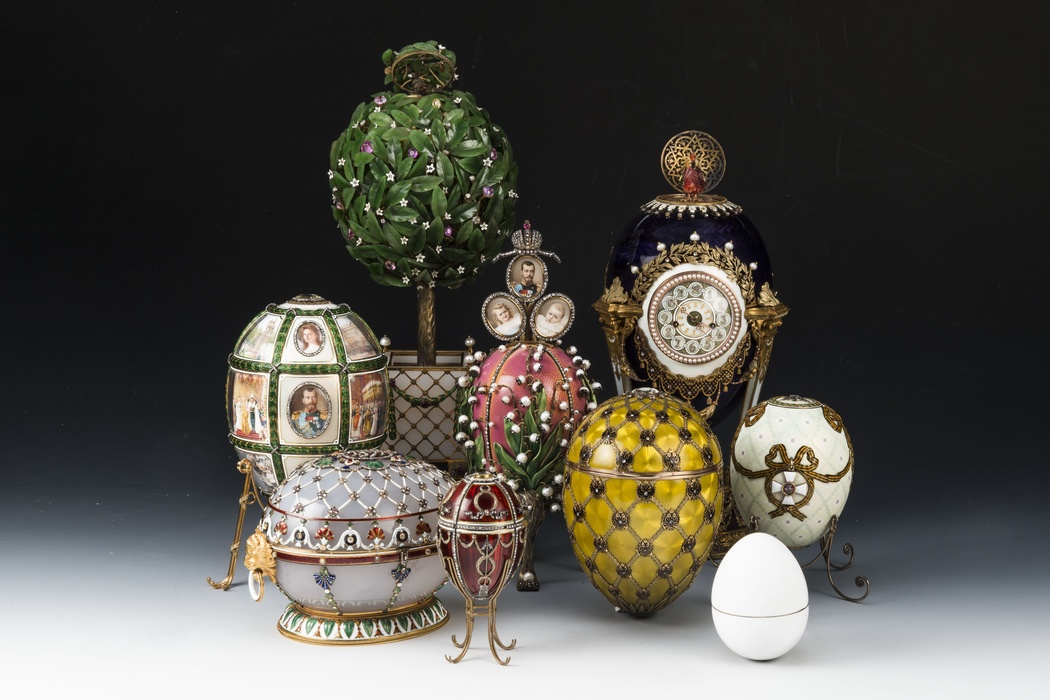 For example, for an egg to just 2 inches in height, have been asked over 11 thousand pounds, or 14.850 euro. However, the sale more shocking was that made by Christie’s, London, in 2007. An egg on stand with a clock and an automatic movement estimated 6 million pounds was awarded to nearly 9 million (or 13.925.609 euro). 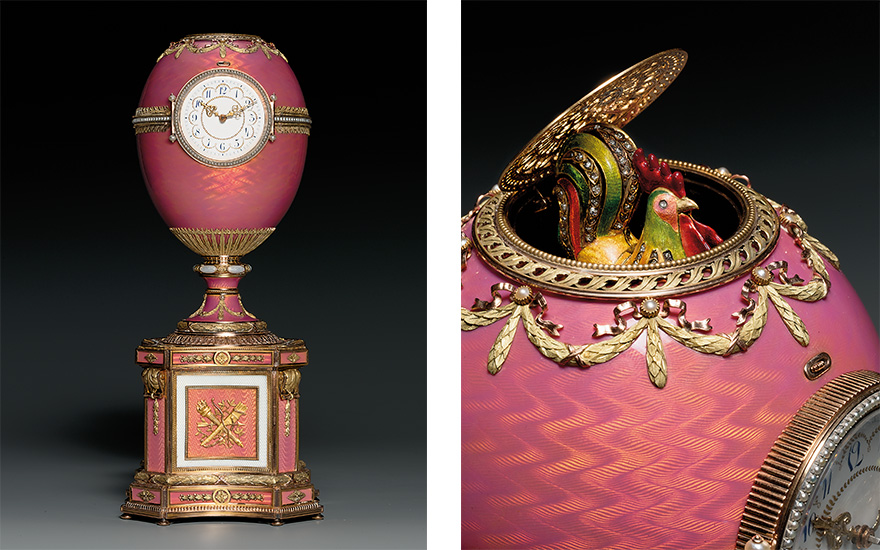 2. The second place on our list is occupied by another egg jewel: Mirage, studded with 1,000 diamonds (100 of which are cut, the unique and inimitable), which are worth $ 8 million. Like all the Easter eggs, traditional, however, they also hide inside, a surprise: a globe completely in 18-carat solid gold, which, in turn, contains a beautiful dove in the crystal.

3. The Easter egg the most expensive in the world between those edible but is made with chocolate and precious stones like diamonds. This is the easter bunny’s award-winning chocolatier Martin Chiffers. The bunny is about 40 cm long and weighs 5 kilograms: the eyes are made of two pure diamonds that raise around 50,000 euros. 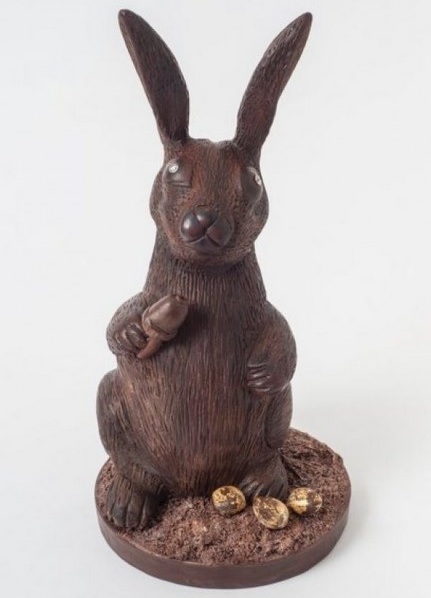 4. Another Easter egg that is very expensive is the Choccywoccydoodah with a price of 25,000 pounds each (which corresponds to more than 32,000 euros). These egg-style Faberge are made entirely of Belgian chocolate luxury. If you want to order one, though, you need to purchase a trio, the total cost is £ 75,000, which is more than 87.000 euro. 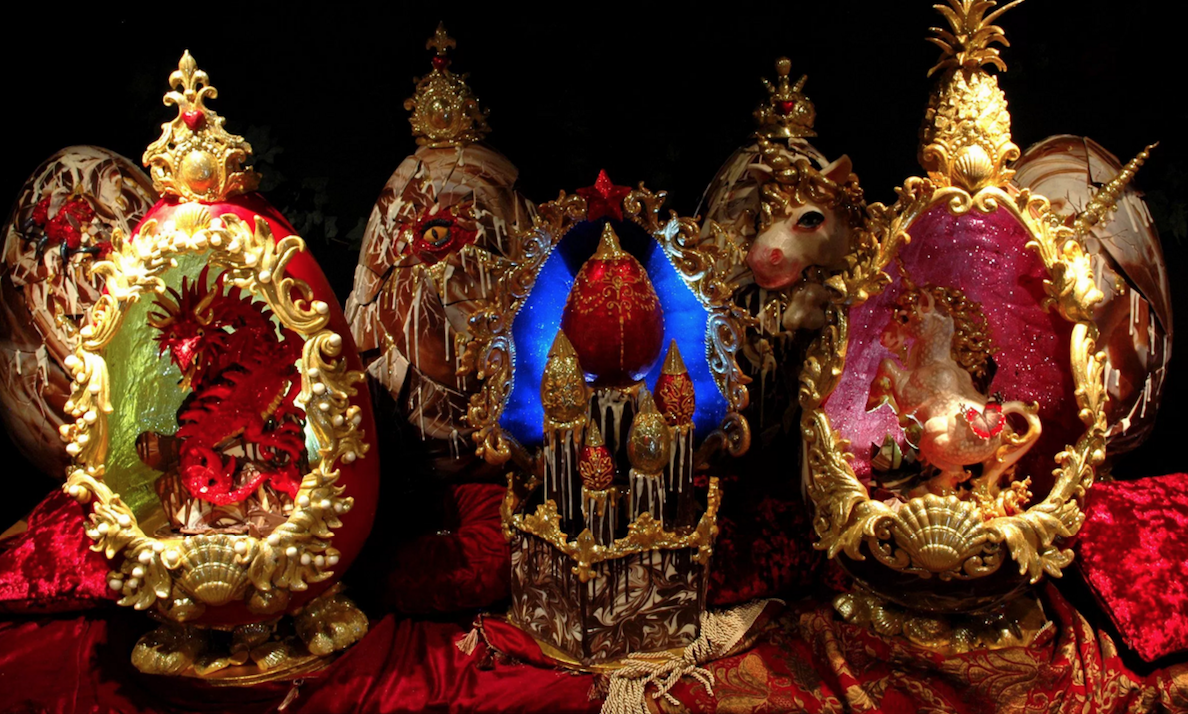 5. Also, the Golden Speckled Egg, created by William Curley, one of maître chocolatier among the most illustrious in the world, is among the most expensive in the world. The creation of the work of art took three days of hard work and seven confectioners’ actions. The egg’s price is 7,000 pounds, about 8,500 euros, but the peculiarity is that there are no jewels on the inside, and it is entirely edible. In addition to the size to raise the price are the ingredients used for its realization, which earned her the Guinness World Record title. Chocolate envelops the egg’s outer shell, while the leaves of gold (edible) were applied on the outside to make it more valuable and exciting. 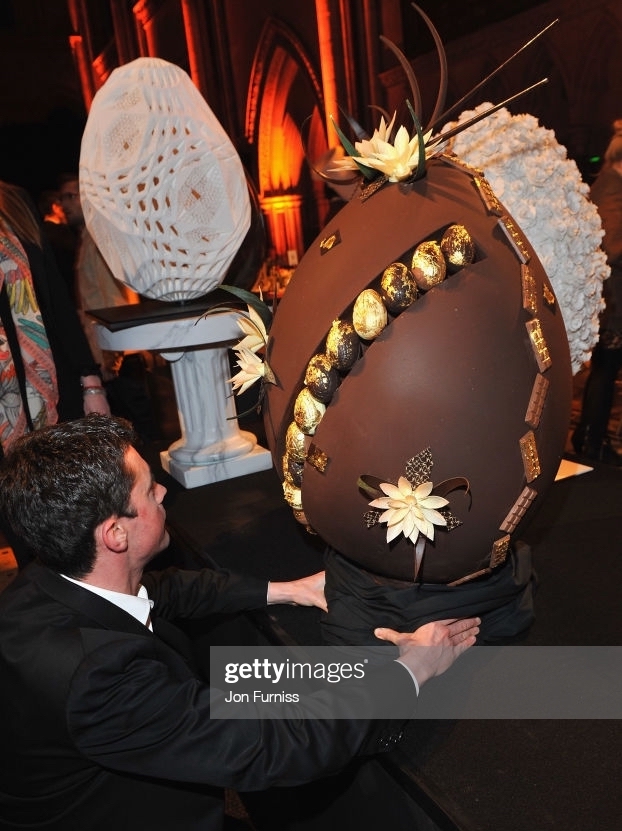 6. A bunny escaping from the shell of the egg of dark chocolate made with cocoa beans from Cameroon and Cuba. Under many eggs, pralinated products, and animals of chocolate. The Easter bunny made from chocolatier Belgian Pierre Marcolini, elected best pastry chef of the world, is a real treat. The cost is 139 euro. 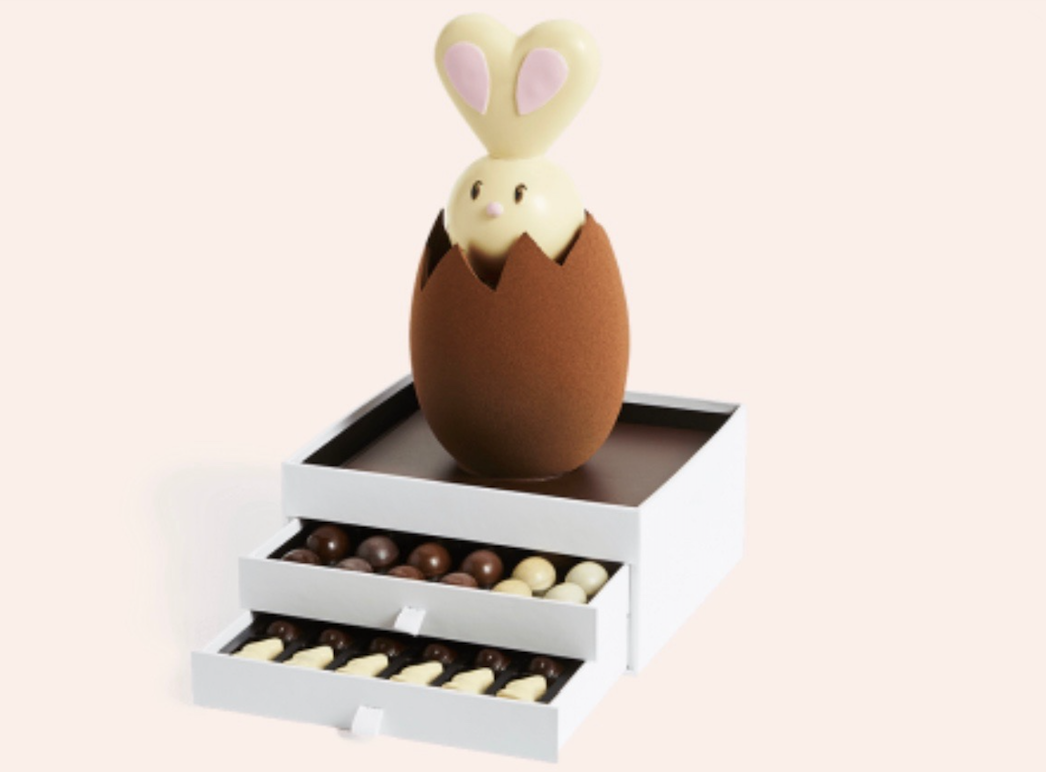 7. Made exclusively for Fortnum & Mason by master chocolatiers of Wales, this egg with rooster, hand painted is covered entirely with chocolate colombian “Fine Flavour” highly aromatic, and with a minimum of cocoa 45%. The paint used to color the cock is manufactured using natural pigments and edible. A task that took weeks to be completed. The price of this work of art itself is £95, which corresponds to approximately 112 euro. 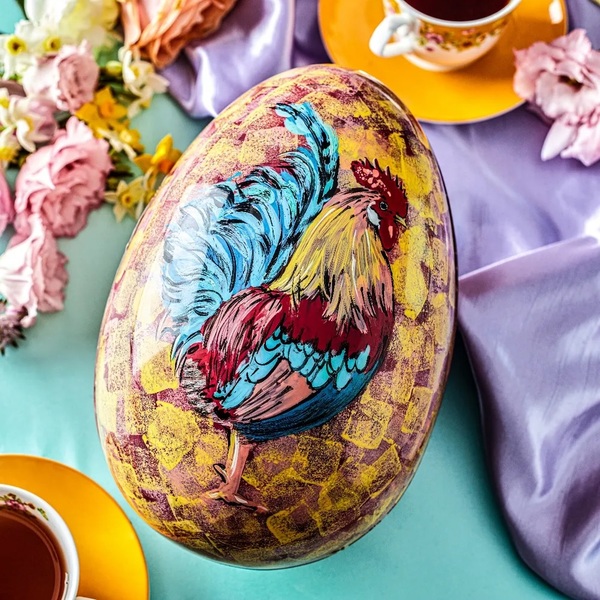 8. The more extensive version of the egg do Easter Venchi is 1kg. Made entirely with chocolate and enriched with the addition of hazelnuts from Piemonte I. G. P. whole, it can satisfy even the most refined palates. The box is embellished with an elegant box with colorful floral prints. The retail price is 100 euros for the larger version, but it is also available, a version reduced from 540 grams. 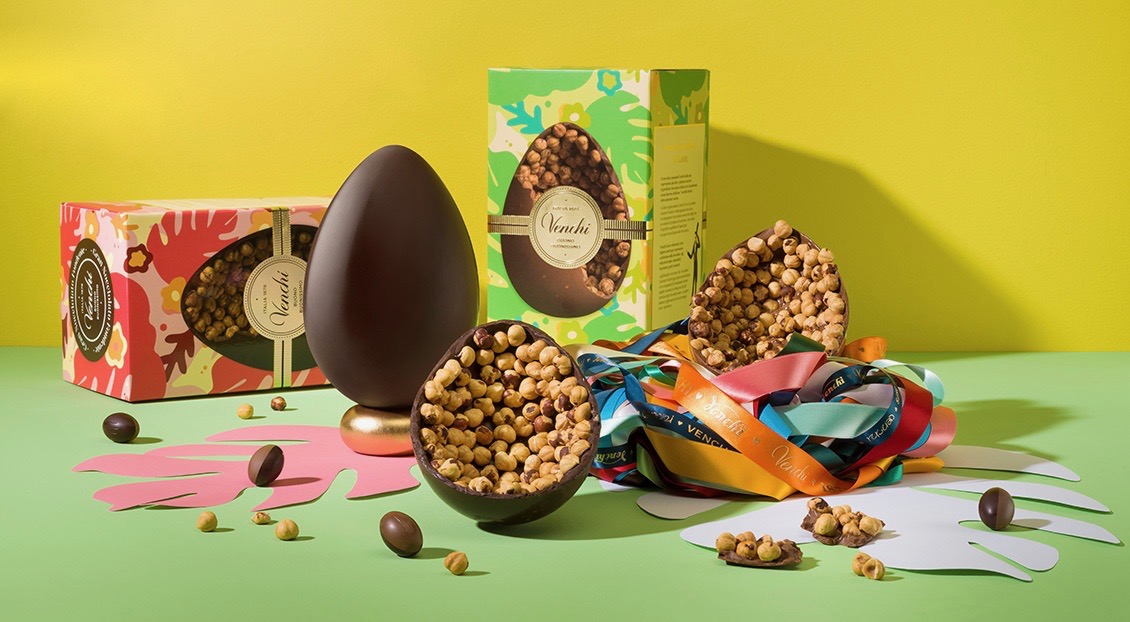 9. The Easter egg, more expensive than Hotel Chocolat, is the classic Easter egg of the ostrich, which comes in for £80 (about 94 euros) for more than 1Kg. Half of the egg is composed of 40% milk chocolate and enriched with crunchy biscuits and puffed rice, while the other half is a crispy feuilletine chocolate-dipped milk to 50%. Inside, there is a tray of reusable tin filled with 20 delicious chocolates. The cost is 95 euro. 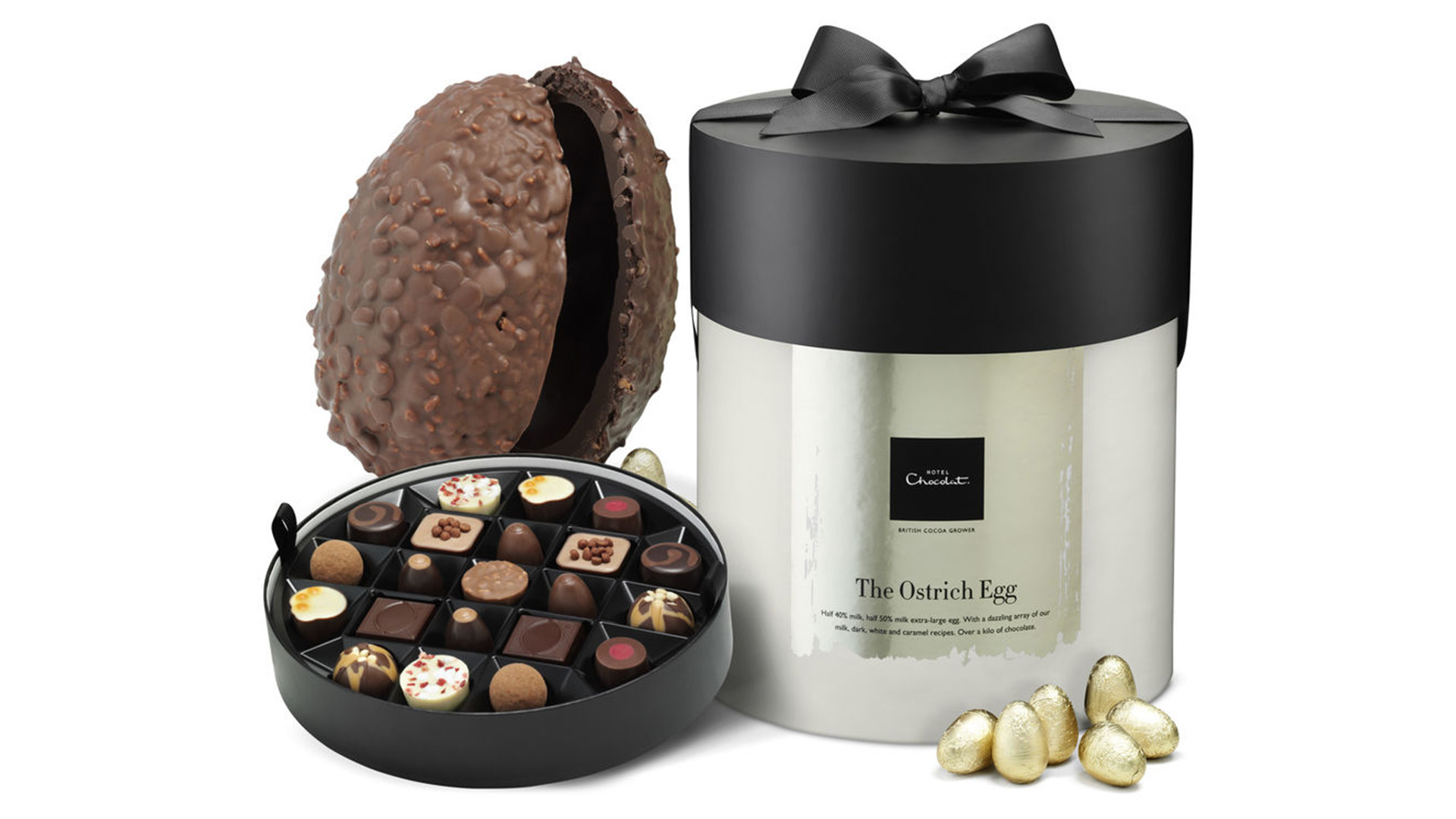 10. In the tenth place, we find the egg of the Hôtel de Crillon created in The Boudoir, the shop of cognac at the hotel, designed by the famous pastry chef Matthieu Carlin. Made with the best dark chocolate, a native of the Caribbean and the Dominican Republic filled with truffle chocolate eggs and praline, the design combines two symbols of the history of the Hôtel de Crillon: the Citroen DS of 1973, used for the transport of the guests of the hotel, and the stone masonry of the sidewalks of Paris. For those who want to buy this luxurious egg, the sale price is 70 euro. 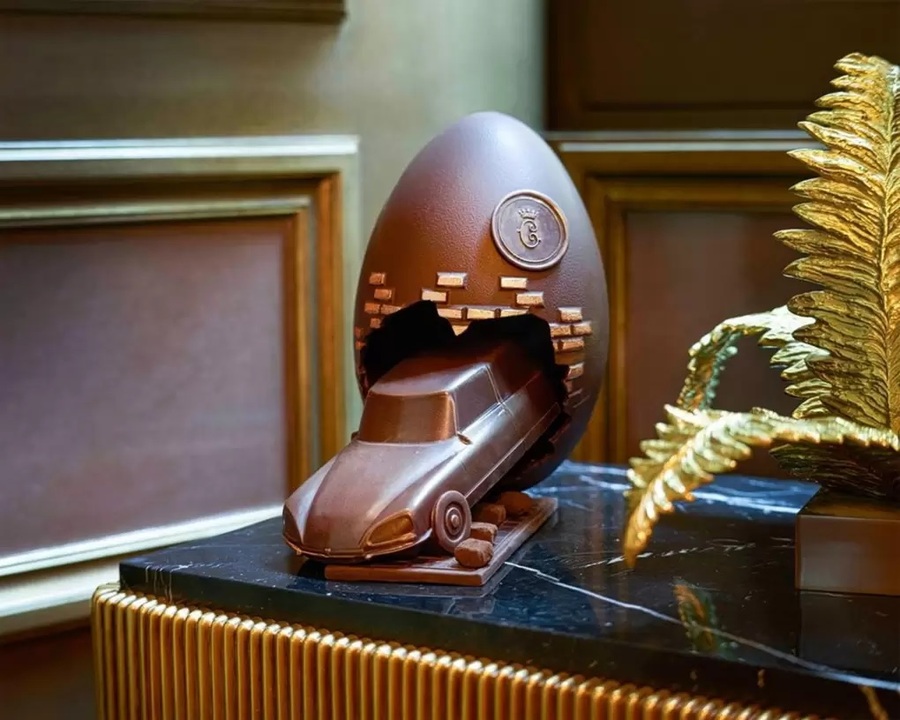 A FABERGÉ EGG FOR GAME OF THRONES