When the Eiffel Tower was inaugurated, on the occasion of the 1889 Expo, the designer Gustave Eiffel became famous for his work in Paris and abroad. However, the engineer did not want to give up the possibility of building a space that was reserved only for himself. Eiffel’s private apartment was not supposed to be large but welcoming and highly coveted by the entire Parisian elite. A space that would be the envy of those who dreamed of seeing the city from over 300 meters high. And so he did.
Located on the third floor of the Tower, Eiffel’s private apartment is not large but very welcoming. In contrast with the steel beams of the rest of the Tower, the apartment is furnished in a simple style: walls covered with wallpaper and furniture chosen in the traditional style of French craftsmanship. Inside there is also a grand piano. It had to create an environment that, as a whole, conveyed a sense of tradition and comfort.
Adjacent to the small apartment, there are some rooms used as a scientific laboratory.
Prev
Next
Once word of Eiffel’s apartment got around, the Parisian elite turned green with envy. Crazy figures to rent even just for one night the little refuge, Eiffel started to arrive.
But the French engineer refused any offer, using the space as a place for reflection and entertaining guests of the caliber of Thomas Edison, who presented him with one of his cameras presented during the same Expo in 1889.
Today, after being closed for decades, the apartment is displayed for visitors who reach the top of the Tower. Most of the furnishings are original, and inside there are two mannequins with the likeness of Eiffel and Edison engaged in a scientific debate. 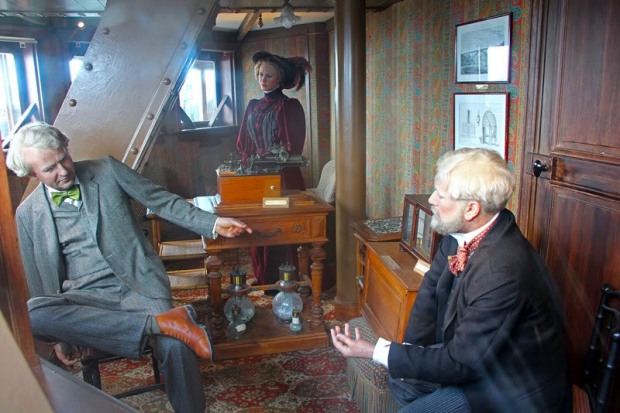